Which country has the best food in the world is the frequent questions for gourmet travelers. Discovering new flavors and dishes is one of the best things about travelling. With every potential destination we always ask ourselves: but can you eat well? In the travel specialists’ opinion, these are the 10 countries with the best and tastiest food.

10 Countries With the Best Food in the World

No kitchen in the world has as many fans as the Italian one. Even in godforsaken places in the South Pacific or deep in the interior of Siberia you will come across Italian pizzerias. The legendary Neapolitan pizza, the richly filled or deliciously simple fresh pasta, the iconic ragu sauces with tagliatelle (‘Bolognese’), the inevitable carbonara with spaghetti, the beloved oven dishes (lasagne, cannelloni) but also the excellent secondis (main courses) with lamb, beef or chicken, those delicious oven potatoes with rosemary and those iconic desserts such as panna cotta and tiramisu: food is a religion in Italy and that makes even us believers. 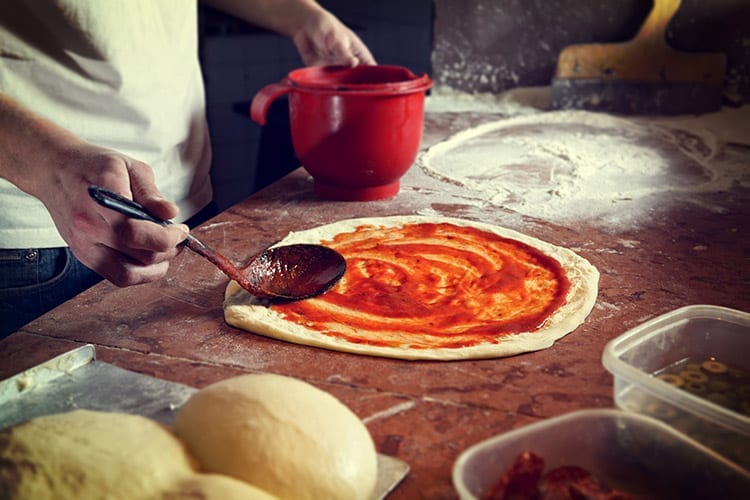 As far as we are concerned, Mexican cuisine is immensely underestimated. When it comes to Latin America, there is no better food country than Mexico. While in other travel countries in this region the local fare often consists of somewhat bland rice, beans and chicken, Mexico offers a huge variety of flavors and dishes. In simple street restaurants you can buy the most delicious burritos, tortillas and tacos with richly spiced and sometimes deliciously spicy contents for little money. Personal favorite: oven-baked enchiladas with guacamole, minced meat, cheese and tomato sauce. In the cultural heart of Mexico – near Oaxaca and Puebla – you have to taste the famous moles (sauces) and then the fantastic mole poblano: chicken with spicy chocolate sauce (!). 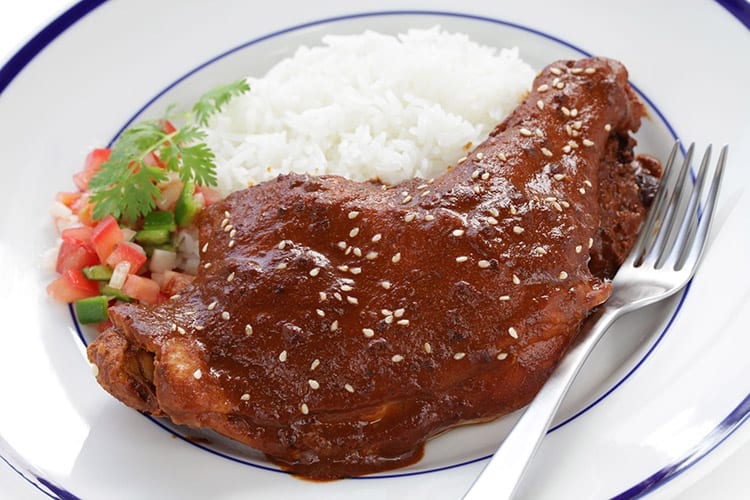 Spanish cuisine offers everything that makes the Mediterranean diet so delicious: meat and fish prepared with plenty of olive oil, the use of wine in cooking, the use of bread with meals, the use of fried onions and fresh tomato and fresh fruit or dairy. as dessert. Oh yeah, and eat late, very late. Preferably only at 10 pm, with lots of wine. Worldwide, it is mainly the classic tapas and paella that make Spanish cuisine famous, but we also like to mention the patata (potato omelette), gazpacho (cold tomato soup), pisto (a kind of ratatouille), migas (bread dishes) and of course the unparalleled cold cuts. such as the jamon, the serrano and chorizo. 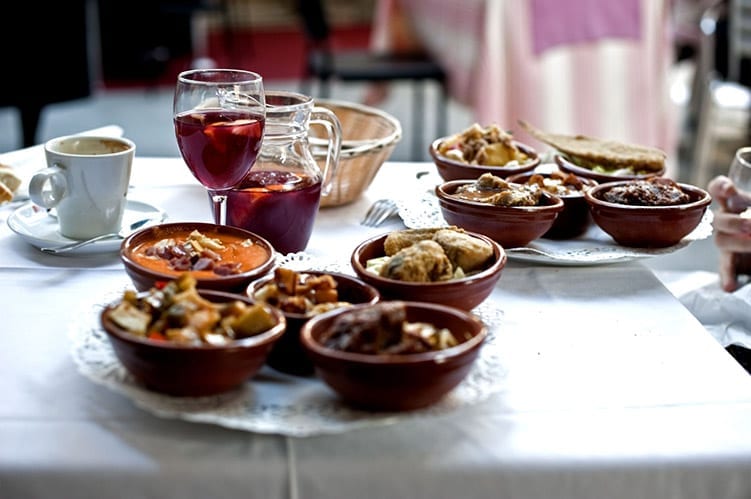 Had this been a list of the tastiest vegan countries, Argentina would not have been on it. If it was a top-10 with the tastiest countries for the carnivore, then it was an absolute top-3 candidate. Because man, you can eat great meat in Argentina. The quality of Argentine meat is world famous. Don’t ask us for an analysis of how and why and all that, but Argentine steaks are second to none. Argentinians eat on average no less than 65 kg of meat per person per year, especially beef and then from the grill or open fire (asado). Local red wine with it, enjoy! The many colonial influences and immigrants also provide Italian, Indian, French, Moorish and Spanish touches in Argentine cuisine. Tired of grilled meat for a day? Then taste the Argentine empanadas (stuffed and fried dough snacks). And don’t go home until you’ve eaten choripán (Argentine chorizo ​​sandwich with chimichurri) on the street in Buenos Aires! 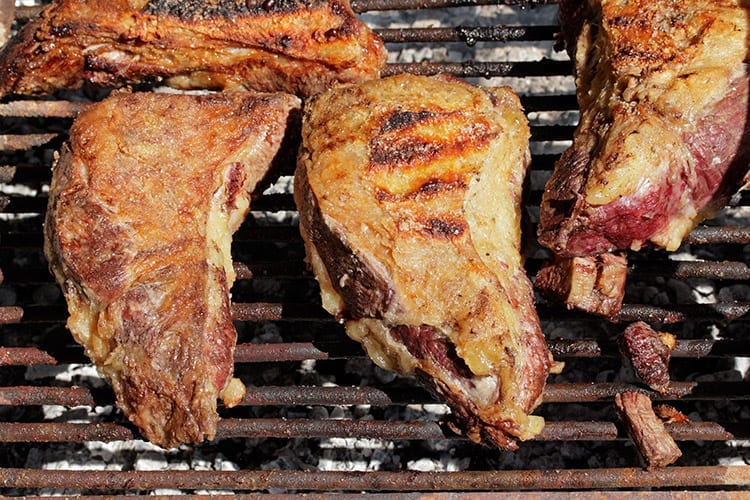 6 Asian Countries with the Best Food in the World

Always, everyone and everywhere: for the Thai food is almost like breathing. Thai cuisine is known for its fresh ingredients and delicious spicy dishes with coconut and ginger. From the many fantastic curries (green, red, masaman, penang…) and masterful fried rice to the iconic Pad Thai for a dollar, the divine noodle soups and the countless ‘meat-on-a-stick’ on the street: food in Thailand is a real pleasure. And, not unimportantly, also very cheap. Don’t be afraid to sample the countless street food stands and markets in cities like Bangkok and Chiang Mai: the quality and hygiene is often better than you think. Just choose a stand where many locals eat, then you’re always in the right place. 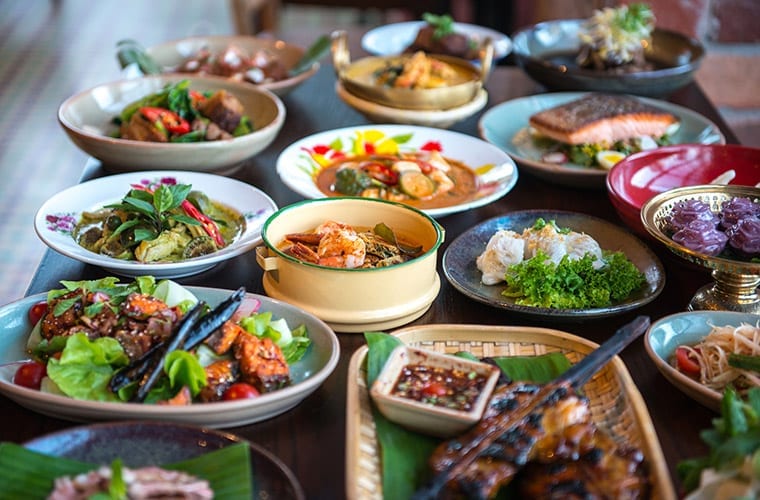 Love it or hate it, but if you ‘love’ Indian food like we do, then you are totally addicted. Those creamy, thick curries containing at least 15 exotic herbs served with soft basmati rice and nan: you can wake us up for it. Especially for the famous butter chicken, rogan josh and korma we would kill. But also the typical chicken or lamb from the tandoori oven, the biryiani dishes, the lentil soups, vegetarian thali’s, the samosas (spicy warm dough dish with potatoes, among others), the various chutneys and the lesser-known dosas (a kind of pancakes made of rice and lentils). ): we never get enough of it. The Indian cuisine that we know here is mainly that from North India (Punjab); in the south, near Kerala, for example, fish, coconut and banana leaves are used much more. Eating on the street in India is tricky, but the street food in cities like Mumbai or New Delhi is legendary and really not to be missed. Make sure that it is freshly prepared in front of you and that there are many customers, then you are often in the right place. It’s worth it once in a while! 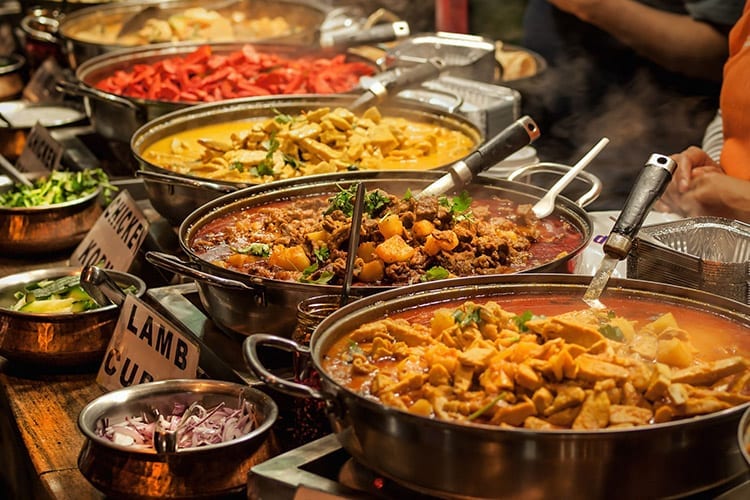 While sushi has become a somewhat standard all-you-can-eat feast in many western countries, it remains a high-quality piece of art in Japan. Prepared to absolute perfection like in Japan, there is little more mouth-watering than fresh sushi. But Japanese cuisine is more than sushi, much more. Japanese rice (gohan) – with its typical round grain – is the soul of the kitchen. This always includes steamed or stewed vegetables and preferably miso soup (super healthy!). Popular worldwide are also the teriyaki dishes where sliced ​​meat or fish is fried on a plate in a marinade of soy sauce. The noodle dishes such as udon and ramen are also masterfully delicious. The preparation, the serving of dishes on the plate, the entire decoration and entourage: food is a ‘work of art’ in Japan, wherever you will eat there. It is said that the Chinese eat with their tongue and the Japanese with their eyes. 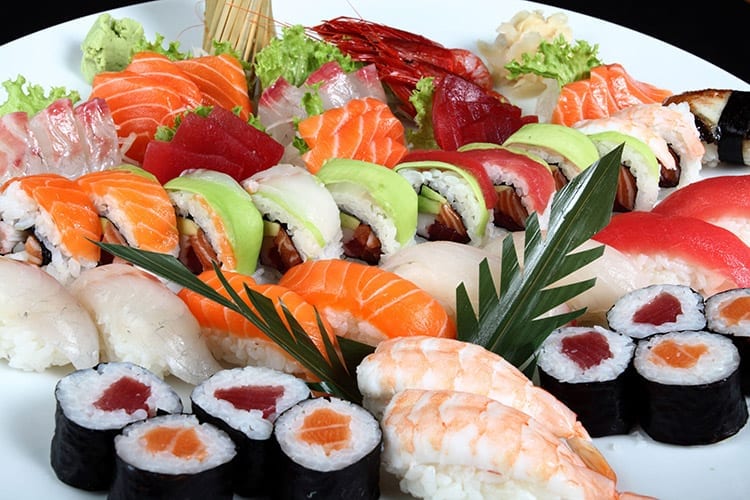 Vietnam is a country full of culinary traditions, known for its use of fresh vegetables and herbs. Don’t be too careful and taste as much as possible. In the streets of Ho Chi Minh City and especially Hanoi, it almost seems as if you are walking through the kitchen of the people! Locals eat and cook on low stools on every street corner. Most of the time you will see them eating pho (divine noodle soup with chicken or beef). The closest thing to the Vietnamese spring rolls we know are the spring rolls; not a broken fried and piping hot stick, but a mix of meat, coriander and vegetables rolled in soft rice leaves. Healthy and super tasty. In Vietnamese cuisine, pork, fish sauce, fresh vegetables and rice are also widely used. Please note: the Vietnamese love to surprise and experiment, so don’t be surprised when you see snake or dog meat on the menu. In the north, the cuisine tends more towards Chinese cuisine; in the middle of Vietnam the food is a bit spicier and in the south the French influences can still be seen (baguette for breakfast!). 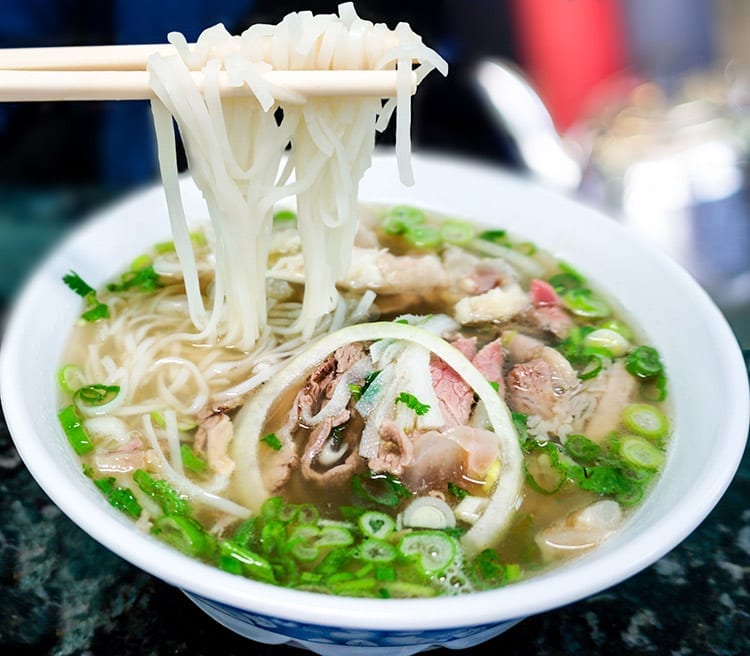 Just one thing: the (Chinese) Indian cuisine as you find it in the Netherlands at the Kota Radjas or Blauwe Lotuss in the province, is not the ‘Indonesian cuisine’ as you will experience it in Indonesia. Moreover: Indonesia does not have just one kitchen, each island has its own specialties. Yet there are certainly similarities: boiled white rice (nasi putih) or fried rice (nasi goreng) is the basis of almost every meal and the world-famous satay (from chicken, pork or – our favorite – goat) is everywhere along the side of the table. to find the way. Ingredients that are frequently used in Indonesian cuisine are coconut, chili peppers, herbs such as laos, jinten, lemongrass and trassi (ground shrimp). Specialties per island include the fried chicken from Java, the world-famous rendang (tastiest dish ever?!) and the babi guling (roasted suckling pig) from Bali. At the stalls along the road (warungs) you can usually eat well and cheaply, the food is prepared on the spot. 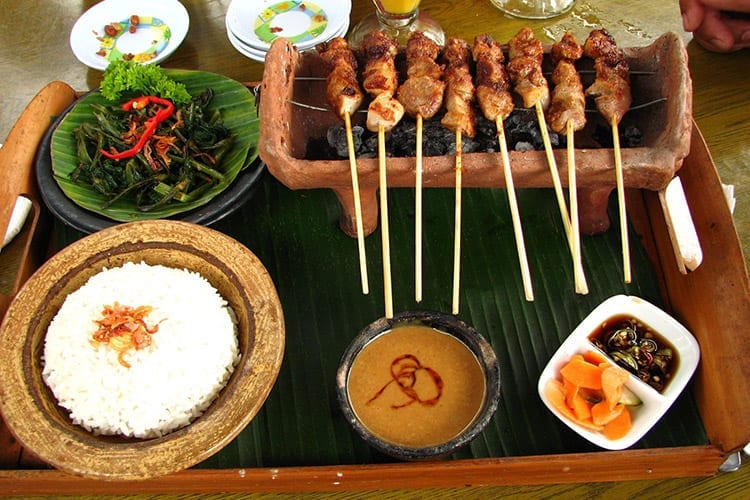 Chinese cuisine, together with that of France (not our favorite) and Turkey (would have been in it, had this been a top-15) belong to the three classic world cuisines. As we wrote above for Indonesia: the food in the local Chinese wok palace of pak ‘m beet Hardenberg is in no way comparable to what you get served in China. Do not expect fu yong hai or babi pangang, these are typical ‘European-Chinese’ dishes. The preferences and specialties differ enormously per region: a common phenomenon is that the Chinese do not distinguish between starters and main courses. Many small dishes are eaten (together) and they are all equally important. The secret of good Chinese food lies in the freshness of the ingredients and the balance between the flavors. Stir-frying is the most characteristic method in Chinese cooking, but there is also a lot of steaming (such as rice, vegetables and dim sums). 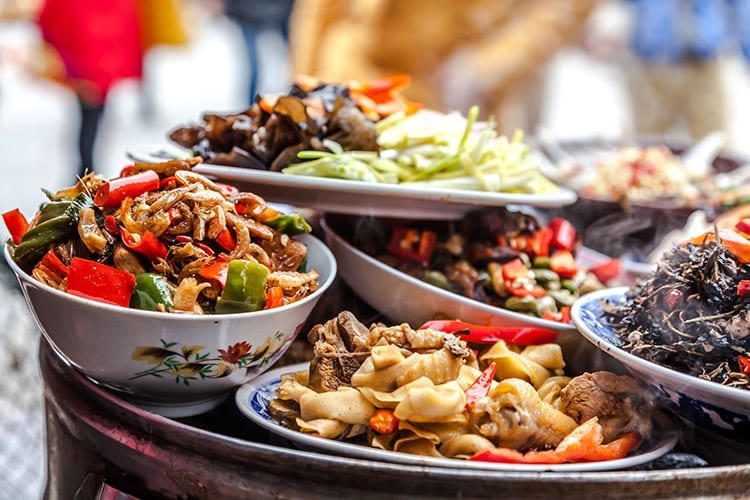 Each region in China has its own specialties and accents. The four most important are those of Beijing (the fine, pure cuisine of the former imperial court, including the famous Peking duck), the Sechuan cuisine (with spicy dishes due to the extensive use of chili peppers), the cuisine of Shanghai (with more international influences , lots of fish and shellfish) and Cantonese cuisine with sweet and sour accents. The latter comes closest to the Chinese dishes we know in the Netherlands: lots of stir-fried vegetables and meat flavored with ginger and soy. The well-known dim sum also comes from Cantonese cuisine.

Honorable Mentions for Some Other Delicious Food in the World

Honorable mentions from us go out to the food in Morocco (exotic and unique flavors, but a lot of tagine and couscous), Taiwan (in the food markets in Taipei you can eat forever, be tough and try the stinky tofu!), Greece (souvlaki, mousaka, stifado, lamb from the oven, fresh fish, the mezes: it’s hard not to like it), America (the art of the good and thick burger! Or how about brownies!), Turkey ( few countries where meat is so well prepared and seasoned, but also those salads!), Lebanon (refined heaven for vegetarians!) and Malaysia, especially Penang (where all the goodness of Asian cuisine comes together).