Saigon (Ho Chi Minh City nowadays) has dozens of inspiring attractions that appeal to visitors from all corners of the world. If you come across the names of the place of interests and would love to unveil the secrets, then get started with the 5 famous places in Saigon with Vietnam Tour Operator !

Previously, “Ben Nge” was the name of the dock in Saigon, and also the name of the little canal in which lots of boats gathered. According to the history book of Nguyen Van Sieu in 1990, it was explained that “Ben Nghe” was derived from the horrifying sounds of the crocodiles on the canals. The crocodiles’ sounds echoing on the canals was similar to the sounds of the buffalos, so “Nghe” (the kind of buffalo) was used in combination with “Ben” (the dock).

Today, the name of Ben Nghe is applied to the ward of District 1. This ward area is very attractive to the domestic and foreign visitors who love to take a walk in the Nguyen Hue Walking Street, the water performances, surrounding coffee shops, shopping malls, etc.

This is the mysterious venue in Saigon because the time when the lake was built is still unknown exactly, but some historical papers said that it was built in 1965-1967. That said, the locations of the lake and the Independence Palace (or Reunification Palace) were connected closely. According to Feng Shui concept, the location of the Palace was on the head of the Dragon while the location of the Lake was on its tail. Therefore, the erection of the Turtle Lake on the dragon’s tail aimed to keep the dragon still by the turtle’s weight. Once the dragon was kept still, Saigon could remain peaceful and protected. The high tower looked similar to the sword (or catalpa) which grasped the dragon’s tail tightly.

At present, the Turtle Lake in Saigon becomes the preferred hanging spot for both local and international people. The area is filled with many street vendors, restaurants, parks, etc., and the proximity to the other famous attractions like Saigon Central Post Office and Notre Dame Cathedral. So you see, with no turtle statue, the Turtle Lake is popular amongst anyone who knows Saigon. 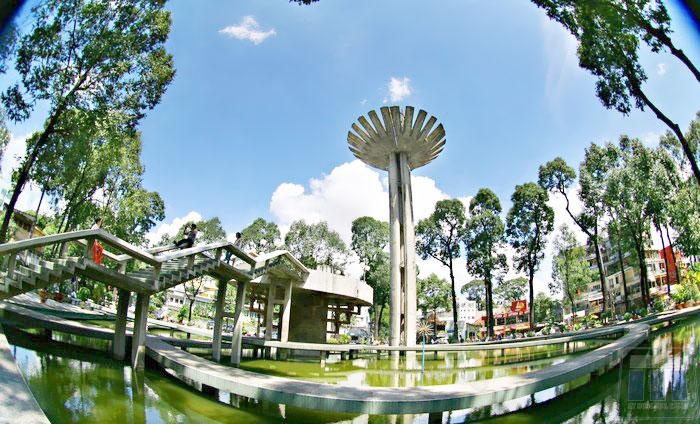 Every Saigonese knows that “Thi Nghe” is the name of the bridge over the well-known Thi Nghe Canal, connecting District 1 and Binh Thanh District, Ho Chi Minh City. About the secret behind the name, history told that “Thi Nghe” was the name that the locals gave to Ms. Nguyen Thi Khanh, the honorable character who built the bridge and helped the residents very much. So, to commemorate her merits, the name was applied.

Nowadays, “Thi Nghe” is a cool place to enjoy a cruise trip while listening to the history of the city, enjoying the folk songs, and contemplating the age-old constructions along the sides.

The name of this construction might drive to the misunderstanding of the tomb site of two people. Actually, this place was the temple to honor Mr. Le Van Duyet – the historical Vietnamese General under the Nguyen Dynasty. To explain why the temple was named like that, people said that because of the real-name avoidance custom, they had to combine the name of the temple “Lang Ong” with the nearby “Ba Chieu” Market. This resulted in the title of “Lang Ong – Ba Chieu” today.

In the 18th century, the southern administrative areas of Vietnam used the names beginning with “Thu” and ending with the commander’s names. In that sense, the name of “Thu Thiem” appeared, of which “Thu” meant the head position while “Thiem” was the name of the commander at that time. But now, in any talk about “Thu Thiem,” the young Saigonese often think of the impressive Thu Thiem underwater tunnel crossing the Saigon River and the new urban apartment centers.

Travel to Saigon and check out these fantastic places of interest soon!